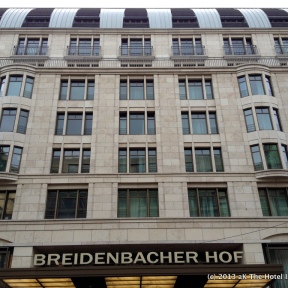 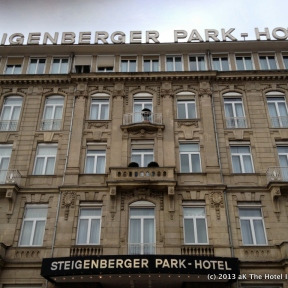 In the 2012 Mercer Quality of Living Survey, rank #6 of the World’s most livable cities is occupied by the German city of Dusseldorf, the state capital of North Rhine-Westphalia. Rather confidential, the city on the Rhine plays nevertheless an internationally significant role as a center for business, finance, fashion and the arts. Its attractiveness is largely shaped by a striking pedestrianized riverfront, a thriving art scene, the elegant Königsallee (one of the most exclusive shopping avenues in Europe) and by a boisterous Karneval.

Historically, two hotels compete for the city’s most prestigious lodgings. Separated by only a few hundred yards, both are local institutions which could not be more different: while the Park-Hotel could be the epitome of the ‘Grand Hotel on the Park’, the Breidenbacher Hof appears as a luxurious city hotel that reinvented itself multiple times since its opening in 1808.

The Breidenbacher Hof has perhaps a more interesting architectural history to reveal, stretching from multiple transformations in the 19th century to an avant-garde redesign in 1928 and its reconstruction in 1950, both of which were carried out by Emil Fahrenkamp, an emblematic architect of the ‘New Objectivity’ movement. Subsequently closed in the late 1990s and then demolished, today’s hotel is a new construction from scratch, actually the fourth on the same site. Offering the most updated ultra-deluxe amenities of any hotel in Dusseldorf since its 2008 opening, the hotel’s style is rather ostentatious and in that sense, the enormous awning of its porte cochère is certainly one of the most impressive in Europe.

Even though its roof and the last floor were reconstructed in the nondescript style after the war, the Steigenberger Park-Hotel nevertheless maintains an ornate exterior that is reminiscent of the representative architecture in Germany at the turn of the century. Inaugurated in 1902, it is a part of Steigenberger Hotels and Resorts today, a group which largely contributed to reestablish the presence of 5-star luxury hotels in postwar Germany.
Having become a little too substantial in comparison to other comparable competitors in recent years, the traditional style for which many of its properties are known for, has been toned down in the attempt to incorporate more contemporary accents.