About aK - The Hotel Investigator

www.thehotelinvestigator.com Follow me on my journeys into the universe of sophisticated travel, luxury and timeless design: an architect’s look at the World’s most emblematic hotels and other fascinating locales that create a true 'sense of place'.

Bonjour and thank you for your interest in The Hotel Investigator.

This site is currently operational and will be updated weekly.

Please join me on my journeys into the universe of sophisticated travel, luxury and timeless design: an architect’s look at the World’s most emblematic historic hotels and other locales.

In 1958, long before being acclaimed Italy’s mastermind of the so-called ‘organic architecture’, a young Carlo Scarpa received the commission by a local family of hoteliers to transform their venerable ‘Albergo della Minerva’ in Piazza Santa Maria Novella.
Assisted by his colleague and fellow architect Edoardo Detti, he designed an entirely new building, leaving only the historical front facade intact. The challenging project foreshadowed one of Scarpa’s main preoccupations in his later works: the integration of the Old and the New into a dramatic overall design concept.
Now called the ‘Grand Hotel Minerva’, the new hotel even featured a rooftop with swimming pool. When it reopened in 1961, its panoramic terrace was (and still is) the climactic exclamation point of a cutting-edge approach which gave way to the renaissance of one of Florence’s oldest hostelries, dating back to the 18th century. 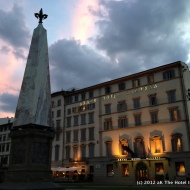