Together with the ‘Metropole’ (1895) and the ‘Astoria’ (1909), the ‘Plaza’ forms the trilogy
of historic grand hotels in Brussels. Inaugurated in 1930 in the sober, streamlined style that characterizes the period, the hotel’s facade bears a certain resemblance to the ‘George V’ in Paris to which it is often, albeit superficially, compared to.
The evident dividing line, however, is drawn by the extraordinary architectural asset of its Belgian counterpart: a massive performance venue with 1,300 seats, incorporated as an independently functioning, yet integral part of the project* that would draw the Who’s Who of the entertainment industry to both parts of the house.

Situated on the main North-South thoroughfare of the historic center, the program of the ‘Plaza’ was, at the time, entirely in sync with its location when it was the sophisticated urban pleasure ground of the capital. But after a closure of nearly two decades, the hotel reopened in 1996, arguably saved by a sound building structure and an original layout which only needed minor spatial modifications. Today officially affiliated with the Royal House of Belgium, the hotels has been courageously relaunched as a bastion of fine living in a central neighborhood that, though not unappealing, definitely lost the glow of earlier times. 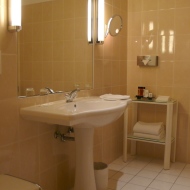 The Appeal
Even in the 1930s, no matter how modern their structure and exterior appearance, many hotels bowed to the rather traditional layout and décor that characterized the ‘palace hotels’ of earlier decades: a central lobby that articulates the public spaces such as the restaurant and breakfast room, bar, salons, grand staircase and the ubiquitous garden court with a glass dome.
But even though the postwar ‘Plaza’ remained a fixture in the entertainment district of Brussels with a famous café terrace on the boulevard, a busy cellar night-club and an interior access to the fashionable ‘Cinéma Le Plaza’, the hotel’s second life had to face and finally give in to the changes of modern times. The result is a restrained version of its glamorous earlier life that nevertheless captures the essence of a confidential and luxurious city hotel. While its former bustling ground floor venues and the extravagant hispano-moresque theater are now degraded to host meetings and functions, the very heart of the hotel – the Lobby and adjacent ‘Estérel’ restaurant and bar in the former winter garden – is still intact and forms a charmingly grand, yet intimate ensemble of near perfect proportions.

The Quarters
Functional solidity, private facilities and adequate natural light by means of generous windows summarize the distinctive features that make the residential structures of the 1930s the precursor of now common architectural qualities. Therefore, apart from a newly created Presidential Suite, the original layout of the hotel’s 172 guest rooms and 14 suites adapted perfectly to contemporary requirements. Today’s accommodations reflect an updated, pragmatically elegant level of comfort that makes good use of the existing spatial qualities. Contrasting with the classical poise of the public areas of the hotel, their high ceilings form clean-cut, but rather unadorned volumes that are quite typical for the period (and certainly not unpleasant by today’s standards). While most of the bathrooms are rather spacious, their fittings are perhaps a little bit too utilitarian for a luxury hotel. Giving substance to purpose, the most agreeable authentic aspects of the rooms are their built-in wardrobes and the small private foyers with an additional door to the bedroom itself that afford privacy.

The View
Recessing gradually from below, the three top floors of the hotel afford the amenity of a small terrace that lines the facade in the style of many Parisian buildings. From here, the central location of the ‘Plaza’ affords good views of the city skyline, making those units quite desirable. But unless being allocated in the upper parts of the building (floors 5 through 8), most rooms offer typical city views of the boulevard, side streets and the admittedly quiet, but nondescript courtyard.

The Quality
In addition to comfortable furniture and a harmonious color scheme, potted live orchids
in each guest room indicate a welcoming attention to details. While more substantial additional amenities like turn-down service depend on the reserved room category,
free-standing air condition units and decidedly straightforward bathrooms reveal several deliberate compromises that were made during the refurbishment of the hotel nearly twenty years ago. But those evident discrepancies with the usual 5-star standards only infringe minimally on the hotel’s solid consistency and timeless elegance. In that respect, the ‘Plaza’, a royal warrant holder, offers a far better level of overall coherence than the ‘Métropole’, its traditional contender further down the street.

The Name of the Game
Missing the buzzing atmosphere of its heyday, a hotel like an ocean liner that is steering through quieter waters.