In and Out…
Venice | Hotel Danieli

At the end of an afternoon in late March, as the ambient dampness of the lagoon was getting more and more palpable, the sight of Hotel Danieli’s landmark facade on Riva degli Schiavoni offered an inviting opportunity to transfer the unique visual experience that is Venice into a warmer, cozier environment over coffee or tea…
The Danieli is without any doubt the most famous and iconic hotel in an equally famous and iconic city: its location mere steps from one of the world’s most fascinating urban ensembles, the main building itself (the historic Palazzo Dandolo dating back to the 15th century) and finally the profusion of illustrious visitors who have stayed here since 1840, has made the hotel the address of choice for the Who’s Who in real life and in fiction. 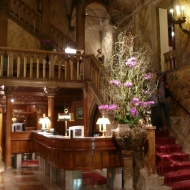 Perhaps no other hotel conveys a ‘sense of place’ so well than the Danieli: dignified but certainly not ostentatious from the outside, its Venetian exuberance lies all inside and is revealed immediately by the magnificence of its lobby as well as the adjacent lounge and bar. The typical marble and terrazzo floors are a reminder that the city’s ubiquitous high tides, or acque alte, do not even spare the ground floors of grand hotels (as confirmed by the barman).

The hotel consists actually of three buildings connected by bridges: the historic palazzo, the 19th century addition ‘Royal’ and the 20th century wing nicknamed ‘Danielino’ whose marble facade, just like many similar buildings all over the country, substantiate the period when postwar Italy was transitioning from its fascist past to happier days.

Currently managed by Starwood as part of their Luxury Collection, the venerable Danieli does not seem fully suited, visually that is, to be part of a larger corporate structure that tends to standardize amenities and details: embossed china and tableware in the lounge have disappeared, flat screens at the concierge desk clash with the historical surroundings and the ‘Dolce Vita’ appeal of the ‘Danielino’ wing, at least in the public spaces, is deliberately shunned in favor of a generic historical reversion that ignores the subtleties of the original design. 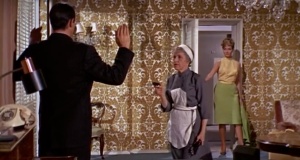 ‘From Russia with Love’ (1963): Final scene at the Hotel Danieli

Even though renovations were carried out partially by the renowned interior designers Jacques Garcia and Pierre-Yves Rochon, a glance at the hotel’s website exhibits guest rooms – especially those in the lower categories – that still feature a décor that might have well been the studio set of ‘From Russia With Love’ several decades earlier.

The Verdict
Because of its landmark status and undeniable architectural appeal, the Hotel Danieli most definitely merits a subsequent, closer look.